Please note that this is a wargame with character customization (like Necromunda), not a role-playing game.

A short rules system for arena battles between miniatures in a post-apocalyptic Scandinavia. Build your team of fighters from several available characters and equip them with any weapons you like and can afford, then duke it out in the pit!

Rounds are divided into sequences where everyone acts before moving to the next, to enhance the immersive feeling of simultaneous action and to reward strategy.

There are  downloads available for anyone interested in making their own characters for the game, as well as a few extra scenarios to expand the battle possibilities.

Ideas for future content include a solo mode and a campaign system, but it is highly likely that these will never be completed, so please don't expect too much.

In order to download this game you must purchase it at or above the minimum price of $11 USD. You will get access to the following files:

Support this game at or above a special price point to receive something exclusive.

Will you be making additional features for this game?
Or is there somewhere people could submit features they would like to see?

When you say "Support this game at or above a special price point to receive something exclusive." Does buying it in the Bundle for Ukraine include the exclusive thing? My friend bought the bundle and we want to see if we got everything for this game.

I might do additional things. I've been thinking about a solo mode, for example.

The text referring to "exclusive things" is just standard text I don't know how to remove. It's just there because I have enabled the free community copies as a "reward". You should have access to everything.

Cool, I got one of the free community copies (I am planning on getting the Ukraine bundle later) and any future addons you make.
I like the idea of a Miniatures war game that lets me make custom units so much that I have only had the game for about 3 hours and I have already made cheat sheets, an empty character sheet, and am getting started on some homebrew stuff that I think would make great additions to the system. I love the simplicity of this and it seems like a great way to get my friends into War Gaming.

I did have a few rules questions as well:

1.) When a weapon has the Burst Property it says "The number of dice rolled when attacking with this weapon, if more than one." I assume this means that the dice are all rolled against a single target?

2.) Rules regarding Type: It states that, "The different types have different skills, roles and proficiencies." Yet I can't seem to find any mentions of skills, roles, or proficiencies elsewhere in any documents. Like a few weapons are called 'light weight' or 'too heavy for most', but I don't know if that means only those types can use them. Also in the Create your own Character document it doesn't seem to have a cost for picking a type so what is to stop me from making all my characters Light for the good initiative bonus?

3.) There is a statement saying "...getting a panicked character back in the fight" but there are no rules for panic or morale.

4.) Ranged Weapons kind of seem unpolished for the system because a few have notes that would seem to imply mechanical traits, or events that are not referenced elsewhere in the documents.
Examples:
"...this rifle is more accurate at long range." Does this mean that it is less accurate when closer?
"...semi-automatic shotgun from before the Uproar." What is the Uproar? I assume that is what the Melding was called before being revised.

5.) Melee Weapons are all good from my read through. I just noticed though that Spears are the only Throwable Weapon. Not a big deal, but I see Throwable Weapons as a huge opportunity for more fun (Nets, Grenades, Knives, etc.)

All in all amazing idea and game! I love it so much and am willing to share any cheat sheets or homebrew I make for the game if you are interested.

2. In FEVERPIT, type has no restrictions other than the initiative, really. Nothing's stopping you from making a team of only lights.

4. That is all flavour text in this game. The Uproar is indeed an earlier name for the Melding, I should get that fixed.

5. There used to be more throwing weapons. Might add some back in a supplement.

Now, the reason for the types, flavour text and morale confusion: This is the first part of the Feverland games I have planned. There is a much bigger thing in the works, and they share a lot of rules and mechanics, while I cut out the bits that didn't feel right for FEVERPIT (which is supposed to be a simple and quick game).
"More accurate at long range" really is that when there are long weapon ranges in the game, but the Feverpit arena is small enough for that not to matter.

If there's anything you'd like to share with me, you can send it to me at "chaoticalignmentgames [at] gmail [dot] com".

That all makes sense, I get the desire for a simple game. I am trying to make my own TTRPG and it is a nightmare getting what is in my head onto paper in an understandable way. 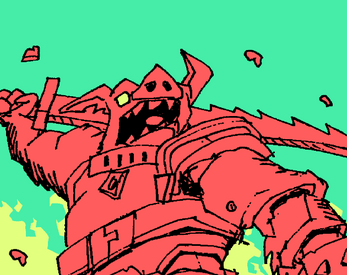